Up Close And Gone 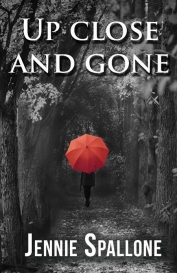 Recently retired Chicago Sun-Times reporter Shana Kahn just can’t stop asking intrusive questions, even of her daughter’s new in-laws. That starts an argument at the family reunion brunch in Central Park. Humiliated when her husband refuses to stand up for her, Shana flees the restaurant, planning to fly home to North Carolina. A sudden downpour finds Shana unprepared. When a nice young man offers to share his umbrella, Shana’s trusting response leads to a heinous series of events. Even worse, Shana doubts her family will inquire about her “gone” status.

In fact, Shana’s husband and daughters are overcome with guilt and worry. As one daughter goes into early labor, NYPD Detective Stella Hernandez is assigned the case, but the kidnapper’s trail grows cold. To save herself, Shana must understand her assailant and uncover his shocking secret.

“Jennie Spallone’s Up Close And Gone has merit…”

-Lee Child, author of The Enemy

“Jennie Spallone explores the mysterious and sometimes frightening connections
between parents, children, and siblings. Its sharply drawn characters will not just
make you think, they will make you feel.”

“I’ve read several novels by Jennie Spallone and find her a talented, most promising writer! Protagonist Shana Kahn is a unique character, indeed.” 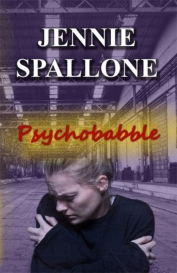 Dr. Katherine Cook, Ph.D, struggles with frequent black outs, memory loss, and impulsive behavior. Items she’s not purchased turn up in her desk drawer and refrigerator. After neurological and physical tests come back negative, the Chicago domestic violence psychologist fears she is losing her mind.

As Kate wrestles with her health situation, a serial killer of pedophiles is on the loose in the City. CPD detectives Maggie O’Connor and Monroe Jackson plod through a tangled web of leads, while the FBI chomps to take over the Case.

Then Kate’s colleague reveals a member of the Loved Ones of Pedophiles support group they cohost may be involved in the killings. Now the psychologist must decide whether to betray the anonymity of their members, or allow a serial killer to walk free. Either way, she will be forced to confront childhood truths she’s kept hidden for two decades — even from herself.

“The author has done her homework, and you’ll find that the psychological issues in this story are very well researched and credible… All of this comes together, as if building an mysterious cloud of fog that has to be entered, explored and studied before being able to determine the answer so desperately sought…

“I enjoyed reading this book. It is well written and kept my interest through to the end. I will admit that I didn’t identify the killer until near the end of the story. Maybe you will do better than I. There were a few other surprises for me, but I can’t reveal those.

“Jennie Spallone takes us to some very dark places in this original psychological thriller.”

-Sam Reaves, author of Bury It Deep and A Long Cold Fall

“Jennie Spallone delves into the dark corners of the human mind to create a riveting novel with a complex, compelling main character.”

“Jennie Spallone has authored a fast-paced, psychological thriller that will take the reader for an adventure into the world of multiple personalities and police work.”

Lake Forest bank executive Joseph Barge is dead and everybody he’s tormented is celebrating, all except Ellie, his 13 year-old daughter. Left to the cold glare of her father who drowned his sorrows in rage and alcohol, Ellie resorted to bullying to get his attention. Years ago, she lost her mother. Now her father,too!

In shock at her father’s death, Ellie plunges into a deep depression, unable to communicate with the outside world. Distressed by her student’s suffering, special education teacher Mitzy Maven teams up with CPD Detective Maggie O’Connor and hottie North Shore Detective Eric Whelan to solve the case.

It doesn’t take long for Mitzy, a former investigative reporter for the Chicago Tribune, to discover a slew of suspects who wanted Barge gone. A disgruntled co-worker. The sexually-harassed nanny. The sister-in-law who fought for custody. Half the White Oaks Middle School teaching staff!

“A fascinating array of characters lead the reader through the mysterious inner life of an emotional disturbed girl and her dysfunctional family. FATAL REACTION bursts with intrigue and ends with a satisfying conclusion.”

“A school setting with a special education environment that exudes authenticity. Mitzy Maven is a solid entry in the detective world.”

“A vulnerable young girl, a murder victim with too many enemies, and a gutsy teacher-turned-sleuth who won’t take no for an answer…. FATAL REACTION is a pager-turner that keeps you guessing even as it tugs at your heart.”

D.M. Pirrone, author of No Less in Blood

Chicago real estate-agent Laurie Atkins is gardening beneath the relentless August sun when her dog’s frantic barks divert her to a dead body sprawled on the front acreage of her Wisconsin summer home. She rushes inside to phone the police, but the body has disappeared. Police chalk it up as prank call, and Ryan, Laurie’s health insurance adjuster husband, tells her she’s just hallucinating. Laurie begins to doubt her own sanity, until the unidentified body turns up on the driveway of Helga Beckerman, their devious neighbor.

When Ryan skips town on the holiest day on the Jewish calendar, Laurie uncovers truths she’d rather deny. The couple is plunged into a web of blackmail and deceit that threatens to destroy an already teetering marriage and jeopardize the life of their young son.

“A brilliantly crafted story of what happens when life insurance companies play god, and how the dark desires of deceit and greed come home to roost.” 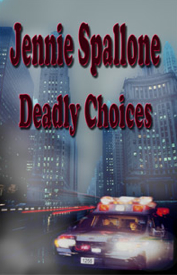 One foggy November morning on Chicago’s West Side, paramedic trainee Beth Reilly faces a life or death choice that will put her own future in jeopardy.  High on cocaine, her veteran paramedic officer slams into a homeless, pregnant woman, forcing the woman into labor.  Beth alone must decide who will live, the fetus fighting for life or the mother who is hemorrhaging to death.  She can’t save them both.

Beth’s decision tests old friendships and creates new enemies. Her woman hating boss tries to destroy her career.  An ambitious prosecutor decides her trial is his ticket to a judgeship.  A religious zealot treats her as a sacrificial lamb, diverting suspicion from the woman he loves.  A handsome professor enters her life, but is the timing coincidental? When one of her tormentors dies suspiciously, Beth realizes her choices have turned deadly.

“I just finished your book, Deadly Choice and am writing to say “good job.” I enjoyed the pace and action – you really did your homework on this.”

“I want to say I did enjoy [your book]…because it is all true, human nature is awful sometimes. Also living next door to three paramedics myself, their families who were firemen and policemen, I have heard quite a lot of stories from them to raise the hairs on the backs of one’s neck.”

“Just wanted to drop you a note and say how much I enjoyed your novel, Deadly Choices. The readings really hooked me, so it was great to have the whole book to savor. I felt the characters were well drawn, Beth is a very likable person and I hope you plan to revisit he in future fiction. Her partner, Angie, not so likable, but so interesting – I wonder about her back story. Anyway, thanks for a great read and for providing matter for much discussion in my household. Looking forward to more from you.”

“I was hooked very quickly. The story line wasn’t very predictable which was great…kept me thinking. Honestly, I didn’t know what to expect from your book, nor did I think it would be for me. I’m glad I didn’t just close my mind to it. It was a fascinating story. I could see your book being turned into a TV movie very easily.”